This blog provides information, stories, links and events relating to and promoting the history of the Wimmera district.
Any additional information, via Comments, is welcomed.

A number of photographs (89 in fact) of the Murtoa Stick Shed taken by Heritage Victoria in 2009 are now available for viewing on Flickr.
The Marmalake/Murtoa Grain Store, originally the No.1 Murtoa Shed, is located within the Murtoa Grain Terminal, adjacent to the grain elevator tower and railway line.
The shed is 280m long, 60m wide and 19m high at the ridge, with a capacity of 3.4 million bushels. The hipped corrugated iron roof of the shed is supported on approximately 600 unmilled hardwood poles set in a concrete slab floor and braced with iron tie rods. These poles are the reason for use of the term "stick shed". With its vast gabled interior and long rows of poles the space has been likened to the nave of a cathedral. (Hence possibly Heritage Victoria's most widely recognised photograph of the cathedral-like expanse of the interior of the shed, below) 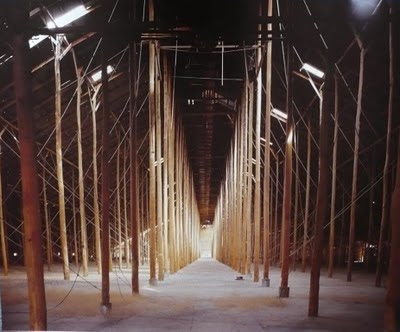 An elevator at one end took wheat from railway trucks to ridge level where it was distributed by conveyor (there are a couple of conveyor shots in the set) along the length of the shed, creating a huge single mound of grain. Braced internal timber bulkheads on either side took the lateral thrust of the wheat, and conveyors at ground level outside the bulkheads took wheat back to the elevator for transport elsewhere.
Wheat had been handled and stored in jute bags from the beginning of the Victorian wheat industry in the mid nineteenth century, but in the 20th century, storage and transport of loose grain in bulk was gaining popularity. In 1935 the Victorian Grain Elevators Board (GEB) planned a network of 160 concrete silos in country locations, connected by rail to the shipping terminal at Geelong. However, with the outbreak of the Second World War, and a worldwide glut of wheat, Australia had a massive surplus which it was unable to export. In 1941 the GEB proposed large temporary horizontal bulk storage sheds, and Murtoa was chosen as a suitable site for the first emergency storage. 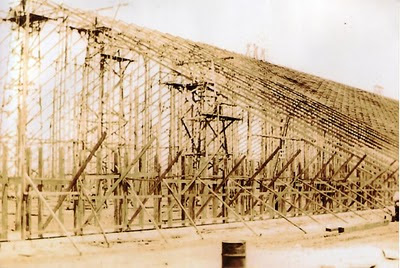 Not as well known, this photograph of the building of the Stick Shed
The main contractor, Green Bros, commenced work on the No.1 Murtoa Shed in September 1941, deliveries of bulk wheat began in January 1942, and the store was full by June. Use of the No.1 shed and the larger No.2 shed, erected in 1942/43, continued for many years. The No.2 shed was demolished in 1975. The No. 1 store was also becoming increasingly expensive to maintain, and its use was phased out from 1989.
The Marmalake/Murtoa Grain Store is the earliest and only remaining of three large sheds of an unusually grand scale of the Australian rural vernacular corrugated-iron tradition built in Victoria during the early 1940s.
link to Heritage Victoria'a set of Stick Shed photos on Flickr for more information & photos check out Leigh Hammerton's Stick Shed site , and blog posts on the Stick Shed.
Posted by Bibliophile
Labels: Historic buildings, Murtoa, Stick shed